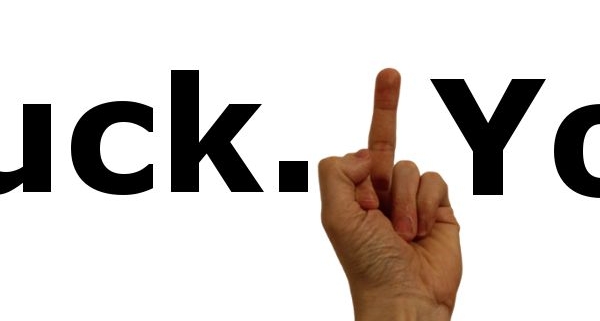 Recently an article from an obnoxiously cluttered, tumblr-esque eyesore of a website named Slate has been making the rounds on facebook.  The article is from 2011, but the snarky, elitist attitude contained within is truly timeless.  The basic gist of the piece is that the author feels very strongly that using a double space after a sentence, instead of a single space, is a crime against humanity and practically the hugest deal in all of recorded human history.  Despite the fact that I felt like I was reading an article from a militant vegan (the aforementioned snark and elitist attitude), I actually have to tip my hat to the author for being able to write such a wordy article on such a complete and utter non-issue.

Here’s the part where I have to be completely forthright in the fact that I use two spaces after a period, and have always done so.  The reasons?  Number one, I was taught that way in school by numerous English teachers.  At no point did a learned individual holding a degree from a reputable organization of higher education ever state that to use double spaces was incorrect.  Number two, the larger breaks help me separate sentences better, and legitimately allow me to read content faster than if there were only a single break.  When scanning text quickly, the larger break allows my cranial regions to split the paragraph into these smaller segments, which I’ll call “sentences”, much faster than if single spaces were used.  Without these double spaces, the period is the only device used to differentiate between one sentence and the next, and this punctuation isn’t sufficient for me to accomplish this task of separation as quickly.  With double spaces, all punctuation could be removed and my reading speed wouldn’t be impeded much, if at all.  I’m not saying I operate on a higher level than you, but I more than likely operate on a higher level than you.

This Slate article employs the same method of paragraph separation I do, which is to avoid indentation, but instead leave a line break between each paragraph to visually separate one from the next.  The traditional method of indenting each paragraph and avoiding line breaks is also an acceptable way to acknowledge a change in topic.  Both methods exist for use, however I format the way I do because it allows me to better visually separate paragraphs, and ultimately to read content faster.  There are people who would argue, and perhaps even write snarky, elitist articles about how only the traditional method is correct, and how everyone else is a literary plebeian.  I tend to format for efficiency, and not merely to adhere to needless stylistic rules enforced by individuals who have never written anything worth the paper or hard drive space their work takes up.  The rules are made to be broken after all, as is the case in every artistic medium in existence.

I also tend to focus primarily on creating content first and foremost, with formatting and arbitrary rules being more of an afterthought than anything.  This probably wouldn’t be the case if I wrote for an ad-revenue generating clickbait site where content is largely an afterthought to merely posting anything in order to generate traffic and the ad revenue that comes with it.  If you write nothing but fluff pieces for a living, you better make sure your writing proficiency is at least up to snuff, because that’s all you have as a writer in your field.   I also tend to hold onto the idea that If you put all of your focus into following the rules of writing proficiency, but never develop your own writing style, and can’t entertain with your words, you aren’t a very good writer.  Clickbait sites are overflowing with people who write, yet aren’t very good writers.  How many of these folks would you actually buy a book from if they were to write one.  I can’t name one myself.  As a matter of fact, I can’t even name one author of a clickbait website article off the top of my head.

If you can actually write, nobody is going to nitpick minor typographical issues in your work.  Grammatical errors are one thing, but typographical errors aren’t true writing errors.  Typographical “errors” can be employed purposefully as a means of expression and style.  A great deal of poetry eschews typographical and structural norms, such as free verse.  I highly doubt that anyone griping over the usage of two spaces after a sentence would touch free verse poetry with a 10-foot (3.048 meter) pole however.  I, for one, enjoy when writing (or music, or art for that matter) bucks convention and does something creative and different.  If everyone is required, or chooses to write in the same rigid style, writing becomes stagnate and boring.  A writer could start using three spaces between each sentence, and it shouldn’t matter, as long as the content is there.  Maybe I’ll change up my style and start writing one word per line with double spacing between each line from this point on.

Hopefully, much like the author of this fluff article, I was able to adequately entertain via a lengthy piece about something completely trivial.  At least my site isn’t an A.D.H.D graphical layout abortion with ads, so you’re welcome for that at very least.

So I was at a swap meet the other day looking at various baubles and trinkets, when something caught my eye.  It was a chest full of old dusty, tattered comics that one of the vendors was selling.  I rifled through countless old issues of X-Men and Spiderman, only to find a very peculiar comic series that I never even knew existed.  Evidently, DC Comics ran a very short lived series in the early 70’s called Betaman.  It was about a sensitive superhero who, instead of fighting criminals, stood up for women’s rights.  Needless to say, I had to buy all 6 issues that he had in his possession.  I’ve scanned a few pages in order to post them here.  They’re fairly bizarre to say the least.  Maybe I’ll get around to posting more of these in the future. 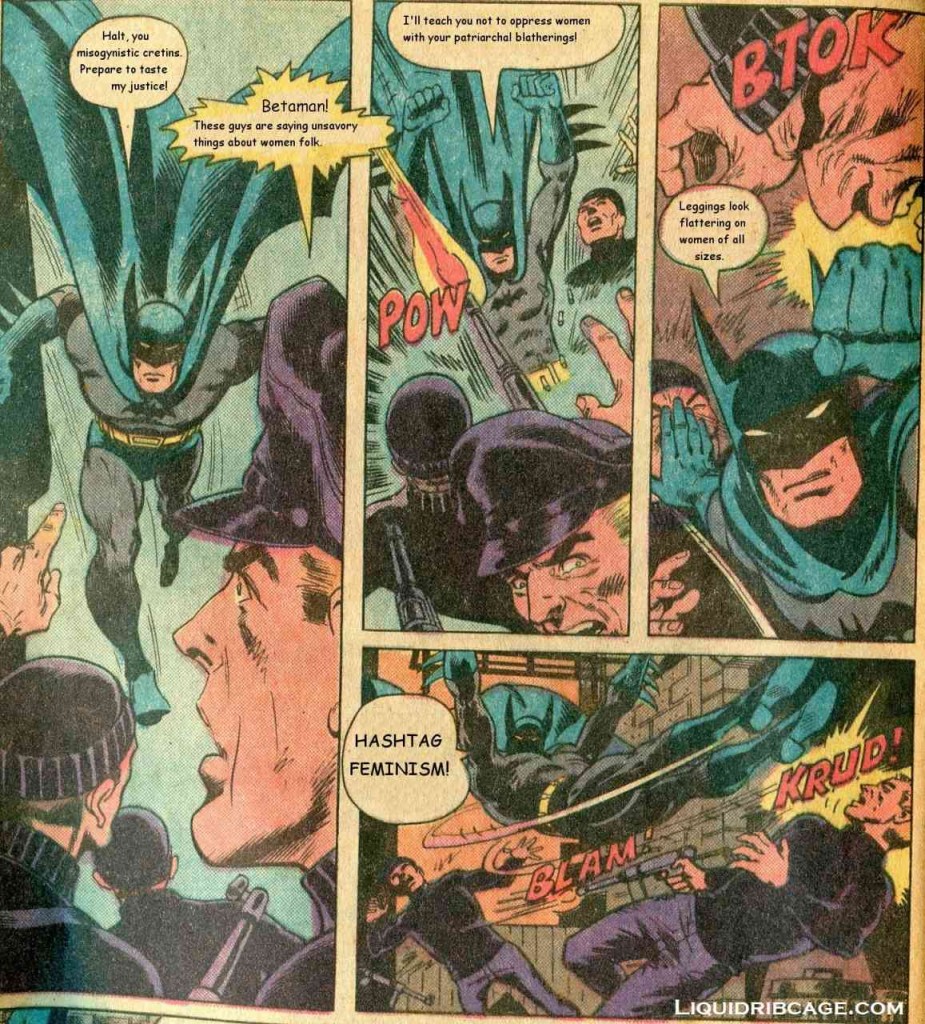 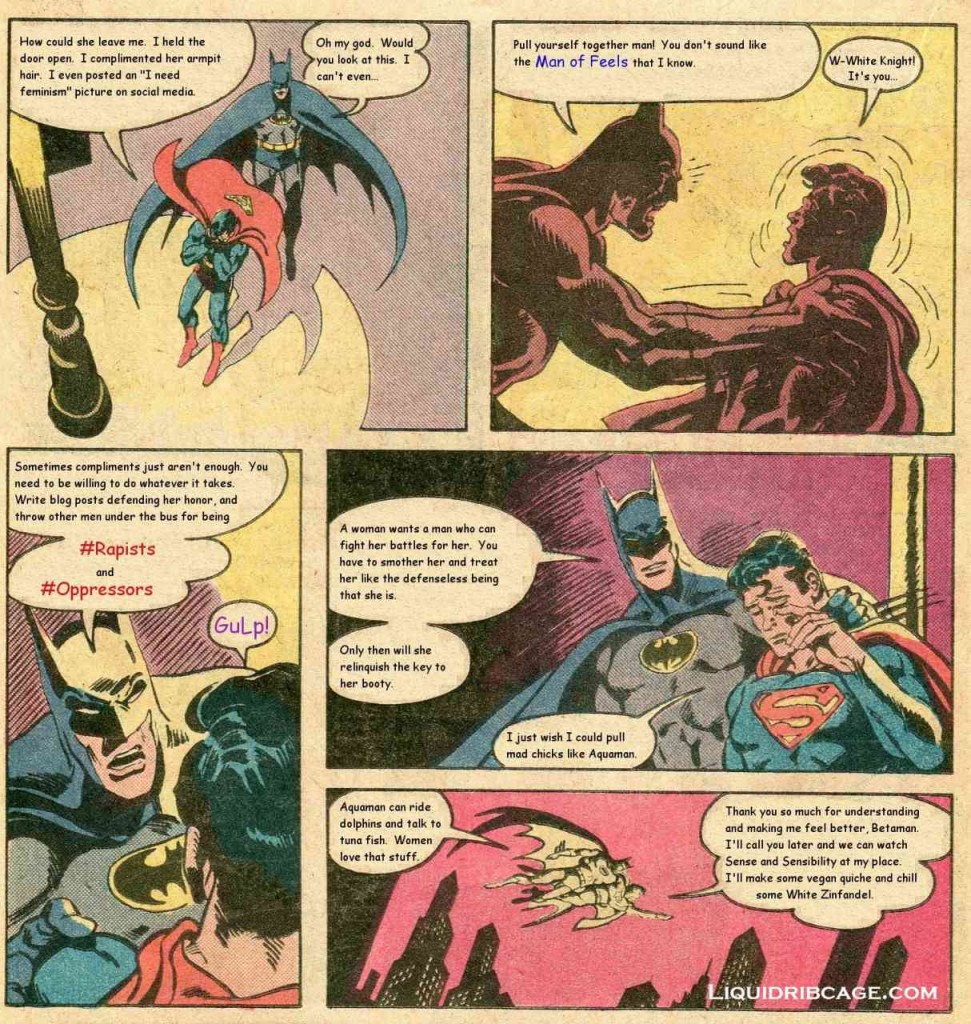 Hopefully this series gets picked up for a big-budget theatrical adaptation.  I think in today’s climate, it could prove to be quite successful.