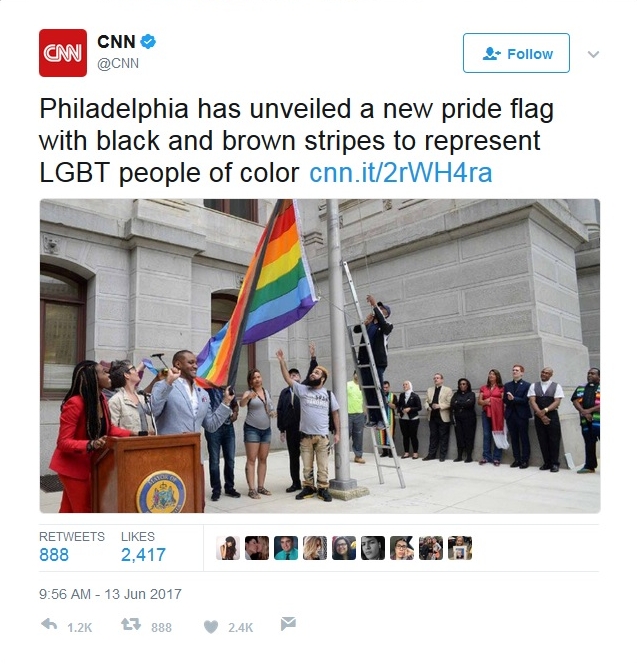 This is like letting children decide what the family will eat for dinner. You end up eating fruit roll-ups and ice cream.

Where do I even start?

First off, the flag already represented people of all colors. That’s why the flag is a god-damn rainbow. You know, because it represents all the colors. Otherwise the flag would have been, you know, black and brown already. The flag contains no actual skin tones for a reason.

Secondly, there is no black or brown in a rainbow. Rainbows are actual things that exist.

Do you see any black or brown stripes in that rainbow up there? No you don’t. That’s because God, Allah, and/or science didn’t feel the need to fuck everything up by cramming insecure human identity politics into everything in nature. It’s refracted/reflected light broken down into a color spectrum, not an attention-seeking, virtue-signalling, circle-jerk opportunity.

This is what happens when you view the world through the lens of 24-7 identity politics. You find racism and inequality absolutely everywhere. Even in the very things that are already all-inclusive by design.

We’re currently at the crossroads where real-life is becoming so idiotic that we’re blurring the lines between satire and reality. Life is turning into an Onion article right before our eyes.

The “ok” sign is now a racist symbol because internet trolls are smarter than Huffington Post readers. Milk is somehow racist now because the average IQ of BuzzFeed’s™ demographic is 76 (I haven’t researched this, but it’s probably true). Society’s dumb and irrational have been given a voice and platform, and this kind of nonsense is the direct result. People like this used to get thrown into volcanoes to appease an angry god. Now they write articles for Mic and Salon.

Now they turn satire into real-life.

Everybody in that first photo is a moron, and deserves to have rotten heads of lettuce thrown at them in the town square. Maybe then they’re learn to not do things that are dumb and nonsensical.

The U.S. recently left the Paris Climate Deal™ and the internet ain’t having it.

That’s what the title of this article would have been it had been written for BuzzFeed™. It also would have been arbitrarily structured as a top ten list, because the easily-amused love a good list. There would have been a lot of pictures too, because journalism these days apparently involves including a photo for every two to three sentences written.

All this is beside the point though. The point is that the Paris Climate Deal™ is a complete joke, and it doesn’t matter that the U.S. isn’t a part of it. This agreement is strictly a circle-jerk and a P.R. move. Any actual research or rumination on the topic makes this quite evident.

To begin with, every country on the planet signed this agreement, except three. Those three being Syria, Nicaragua, and of course, the United States. Well isn’t it bad that everyone’s in on this union except these three? If everyone else is doing something, we need to be doing it too, right? Fitting in and conforming is what all good people should strive for after all.

Take a second and realize who else is signed on to this nonsense.

Does anybody actually believe that North Korea is concerned about the environment in any capacity? Well, they’re part of the Paris Climate Deal™, so they obviously must care about carbon footprints, right? There can’t possibly be any other explanation, like perhaps the fact that being a part of this is a nice P.R. move for “good guy points” on the world stage.

Saudi Arabia is part of the Paris Climate Deal™. The country with the worst air pollution on the entire planet, who also happens to be its largest exporter of crude oil to boot. Does anyone reading this seriously think Saudi Arabia gives a single shit about carbon footprints and climate change? Is anyone caught up in this “save the planet” narrative actually this gullible?

How about those 17 countries where people literally throw garbage into rivers and lakes that they then proceed to bathe and poop in. Are these countries doing their part to save the planet? All of them are a part of this important and worthwhile Paris Climate Deal™, so one can only assume that they care about the environment. The fact that they are actively ruining the environment as we speak should be of no consequence.

I can’t say it’s of much surprise that some of the less rational types out there are getting so worked up over something of so little substance though.

When this doomsday narrative of imminent planetary destruction gets forced down people’s throats on a regular basis, they start to believe it without question. They start to believe that flushing their toilet one less time a day is somehow going to ensure their kids a brighter future.

The fact of the matter is that very little you do as an individual will have any noticeable effect on global warming or saving the planet.

To put things into perspective, the 16 largest ships in the world create the same amount of pollution as every car on Earth. Danish shipping line Maersk’s eight largest ships in their fleet each produce the pollutants of 50 million cars (info from NewAtlas.com). You deciding to not own a car to combat global warming is about as effective as you deciding to lose weight by eating one less grain of rice a day. The consequences of these actions are borderline negligible.

People have a tendency to overstate their own relevancy in the grand scheme of things, though. People love to believe that the minor actions they take are resulting in some great difference in the world. Give a quarter to that homeless person on the corner. You’re really making a difference out there. That guy definitely isn’t just going to turn around and spend that money on drugs and/or alcohol that are merely contributing to his demise. It doesn’t matter how it gets spend though, because you are a great person for having “helped out”.

I highly doubt many of these “I’m saving the planet” types are going to give up their imported goods that are responsible for the vast majority of the world’s pollution. Ironically, keeping manufacturing in the U.S., or just North America in general, is going to do more to prevent pollution than practically anything else, but most of these greenies have been sold on the idea that being against globalism is “racist” or “fascist”, or some other infantile buzzword. Either choose globalism, or choose a pollution-free planet. You can’t have it both ways.

As more goods are shipped internationally, more barges are needed, and as more barges are put into use, the amount of pollution created will continue to increase exponentially. No amount of recycling you do is going to divert us from this path we are headed down. Learn to accept this, and move on.

“Going green” is about as futile a venture as one can undertake. You are but a drop in the ocean, and your impact on the planet is no more relevant.

The people who actually buy into this trend, tend to be the same people who will praise a jackass like Leonardo DiCaprio for speaking out against global warming, while ignoring the fact that he has the carbon footprint of a small city. When you praise someone for being an environmentalist, but their actions and lifestyle are the antithesis of this ideology, you don’t come across as particularly intelligent or informed. Celebrity worship tends to trump ideological consistency among slacktivists though, as the idolatry over Hollywood elites with rudimentary political views has proven time and time again.

Unfortunately, people love to be sold virtue, and are all too quick to buy.

The Paris Climate Deal™ is just another pet rock or fidget spinner. Keep buying in, until you get bored, find something else to preoccupy you, then throw it out with the other garbage.