November 5th was a day like any other day. The sun rose in the morning. Birds started to chirp. McDonald’s opened at 5AM and started serving sub-par breakfast. Media outlets and blue check-marks threw integrity to the wind, logged into twitter, and greeted the day with their daily doses of lies and dishonesty.

Meanwhile, Donald Trump was in Japan meeting with Prime Minister Shinzo Abe. While there, he took part in traditional Japanese pastimes, like playing golf, and eating hamburgers.

Then he fed some koi fish, and the hysterical man-children and women-children of the media were given the opportunity to prove they could be every bit as childish as Trump.

Both Trump and Abe were enjoying a staged photo-op, feeding koi fish from wooden boxes, flinging spoonfuls of feed down to the fishy maws below. Then PM Abe tossed the remainder of his box into the water, and President Trump followed suit.

The basic gist of most of these tweets was: “Trump is moron. Other guy feed fish, but he dump fish food out like moron!!1!”.

Or course, this was in fact not the case, but journalism has changed a lot in the last few decades, and now D+ students are the gatekeepers of news. People who are unable to be objective and deliver a story without a blatantly partisan bias have become a rare breed within the modern media. Hence the increased volume of outright propaganda that gets passed off as actual journalism these days.

Any “journalist” very easily could have looked at the source material, done a little research, and very easily debunked the narrative that was being pushed. The simple act of watching a 30 seconds video that was readily available could have prevented dozens of goofs from posting tweets or writing articles that were so easily debunked. 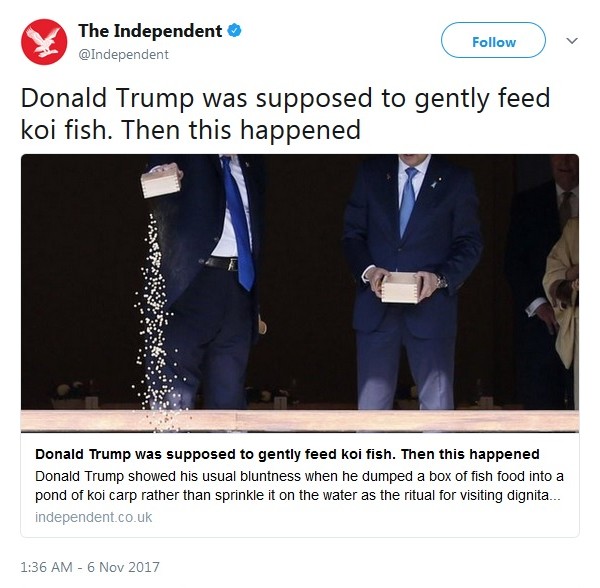 Then what happened, The Independent (blue_checkmark.jpg)? Trump showed his “usual bluntness” by copying the actions of the Prime Minister of a foreign country he was visiting? The same thing all visiting Presidents do? Did Shinzo Abe, the actual Prime Minister of Japan, not know the “ritual for visiting dignitaries”, but you arrogant mouth-breathers do? 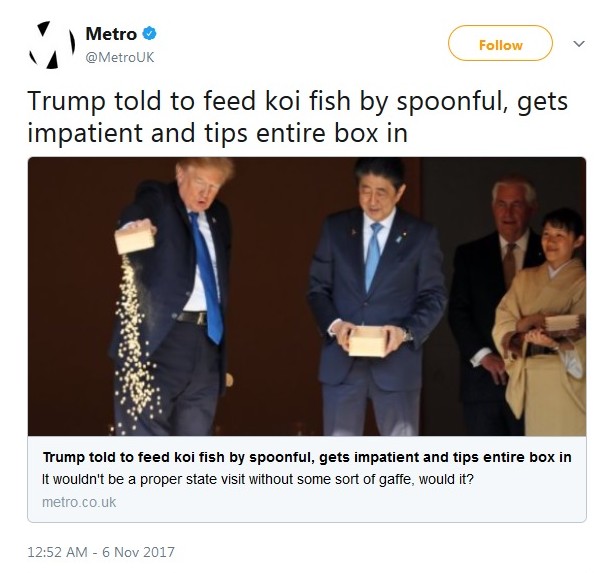 Trump got impatient, did he, Metro (blue_checkmark.jpg)? He got impatient by calmly parroting the Japanese Prime Ministers actions? How do you know what Trump was told? Were you there, Metro (blue_checkmark.jpg)? You weren’t, were you? So essentially, you’re just creating an alternate narrative to push an agenda? This seems out of character for such a dependable, credible media outlet such as yourself. 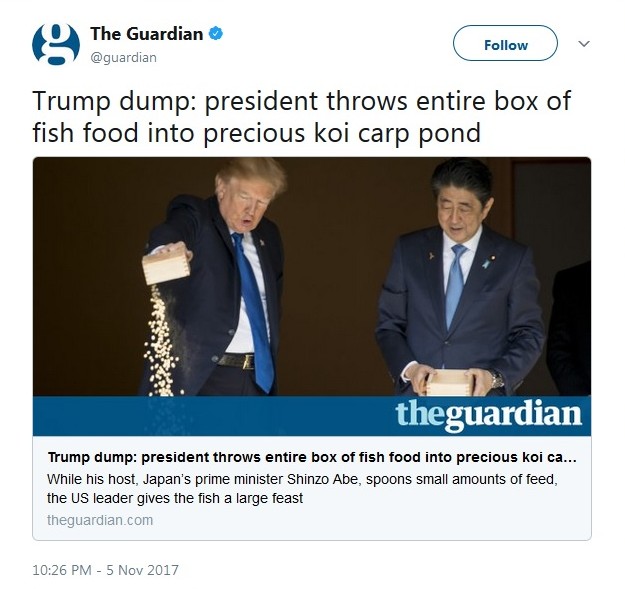 “Trump dump”. That sure is a creative headline, The Guardian (blue_checkmark.jpg). Did someone with a writing degree from a college come up with that? I can’t help but notice you’re running the same false narrative as all the other outlets writing stories about this non-event. It’s good to know that British “news” organizations are just as unreliable and dishonest as their U.S. counterparts. Keep up the work. 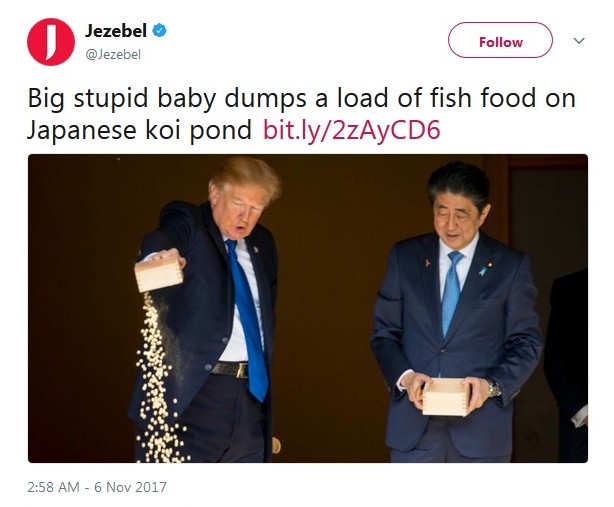 On the other end of the (autism?) spectrum, we have the childish bastion of anti-intellectual, non-content known as Jezebel (blue_checkmark.jpg). This site not only posted a factually-inaccurate story (practically their business model), but refused to change it after finding out it was wrong. It’s almost as if facts and truth don’t matter at Jezebel (blue_checkmark.jpg). Sounds like an intelligent choice of places to go to get your news from.

Countless other sites posted lazy, copy-and-paste articles about this topic as well. CNN posted doctored footage, conveniently cropping out PM Shinzo Abe dumping his container first, which shouldn’t surprise anybody familiar with CNN’s level of journalistic integrity. HuffPo wrote some 5th-grade level, emotionally-based drivel that 50-year-old women with 8 cats no doubt ate up. There were many more, but I think you get the point.

The grand irony here, is that these articles represent the very #FakeNews that Trump has become known for railing against on his twitter account and at press conferences. Keep in mind, this wasn’t an incident that was easy to get wrong. These outlets either A) didn’t actually watch the footage before deciding to write and post these articles, or B) saw the footage, and still decided to write what amounts to slander. Can someone please explain to me again why trust in the media is at an all-time low?

This wouldn’t be a problem if it were merely an isolated incident, but it isn’t. Most of these sites seem to exist solely as politically-motivated propaganda machines dedicated to writing hit-pieces on a daily basis. If a politician legitimately messes up, journalists should write about it. If that person doesn’t mess up, journalists obviously shouldn’t then alter reality in order to write a negative piece about him or her. This seems like common sense to me. The fact that people still read this type of stuff and don’t question it, is quite disturbing. It’s almost like society is intellectually regressing back to the medieval era.

People are willing to believe absolutely idiotic things as long as it confirms a bias that they already hold. Hence, we’ll continue to get misleading or outright fabricated articles over the next 3 (potentially 7) years, to fuel the partisan dementia that infests social media, and provides a lucrative business model for increasingly dishonest media outlets.

Hopefully we get a Democrat in office next so that we can get back to reading all those cult of personality based fluff articles instead. It’ll be nice to be back in an era where the media outright buries and refuses to cover human right’s violations, corruption, and unconstitutional acts from politicians they share a political affiliation with. After all, that’s truly what journalistic integrity is all about.