Recently, pandering living fossil Hillary Clinton put world famous meme-frog Pepe™ on blast.  For anybody not in the know (the elderly, special needs, Hillary, etc.), Pepe™ is a character from the comic “Boy’s Club”, known for being a freewheeling stoner type fella, who also happens to be an anthropomorphic frog.  Much like Xzibit™, Doge™, and Harambe™ before him, Pepe™ became a popular meme that was shared all over the internet, bringing happiness and joy to all.

Just like the Grinch however, hot sauce connoisseur Clinton couldn’t stand all that happiness.  She hates seeing people laugh and smile.  So she decided to utilize some good ole fashioned fear mongering, in an attempt to paint a digital cartoon character as a legitimate enemy of the state.  Now, it could just be that she’s just old and out of touch with anything remotely 21st century, but regardless, I won’t stand for Pepe’s™ legacy being tarnished.

On money embezzler Hillary Clinton’s website, what amounts to a slanderous hit piece was posted on September 12th.  One Elizabeth Chan, who was no doubt hired by Hillary’s campaign to make the Presidential hopeful seem more inclusive and minority-friendly, posted an “article” about Pepe™ the frog.  I put the word “article” in quotes because the piece is all of 300 words and quite obviously devoid of any actual research or critical thought.  It also reads like something that was written for students in a remedial fourth grade English class.  Maybe that’s the demographic Hillary is aiming for though.

In this “article”, Pepe™ is referred to as a white supremacist symbol.  You know, like the swastika or a burning cross on somebody’s lawn.  “How could this happen?”, you might be asking yourself.  Well, youngster, this is what happens when someone decides to write an article about something they know literally nothing about.  You know… like every Buzzfeed or Huffington Post article ever written.

A few devious young edge-lords on the internet decided to produce racially-themed versions on the Pepe frog, so now he’s being labelled a racist symbol.  That’s a completely rational line of thought.  By that logic, Bugs Bunny, Tom & Jerry, and even Mickey Mouse are symbols of white supremacy.  All of these characters starred in cartoons back in the day that were eventually banned because of overt racism.  Would we not condemn those individual cartoons as racist, without relegating every cartoon starring those characters to the racist pile?  If we were intelligent, we would surely exercise this discretion.

So why would anyone try to convince people that an innocuous cartoon character was racist?  It’s basic fear-mongering, pure and simple.  Most of Hillary’s demographic is middle-aged to elderly, and not exactly technologically proficient.  Most of them have probably never seen Pepe™, because most of them can barely work a computer.  If someone is barely able to work a computer, they certainly aren’t going to know who Pepe™ is, let alone what a meme is.  They probably think a meme is one of those French people who always pretends to be stuck in an invisible box.

Fear-mongering only works when your audience is ignorant of the subject at hand.  Who better to convince that weed turns people into degenerate criminals than someone who has never done the marijuanas?  Who better to convince that heavy metal music is a tool of the devil, than someone who has never listened to heavy metal music?  The ignorant are susceptible to being fed erroneous information, and believing it without question.

So basically, this appears to be some sort of desperate last-ditch effort by the Clinton campaign to coax people into a fear vote.  All other options have been exhausted, so let’s focus of something nonsensical, like internet cartoons.  The incessant minority-pandering doesn’t work as well as it used to.  You can only call your opponents racist so many times before the word has completely lost all meaning.  Hardly anybody shows up to the rallies you rarely give due to your constant illness.  Time to invoke a desperate hail-Mary pass of a political maneuver.

Enough about America’s favorite felon grandmother though.  What I set out to do here was explain that Pepe™ is actually a good guy, and that his name is being tarnished in an unfair political assassination attempt.  What proof do I have that Pepe™ is not a racist?  How about photographic proof?  Will stone cold factual pictorial evidence prove once and for all that the frog is a hero and not a zero? 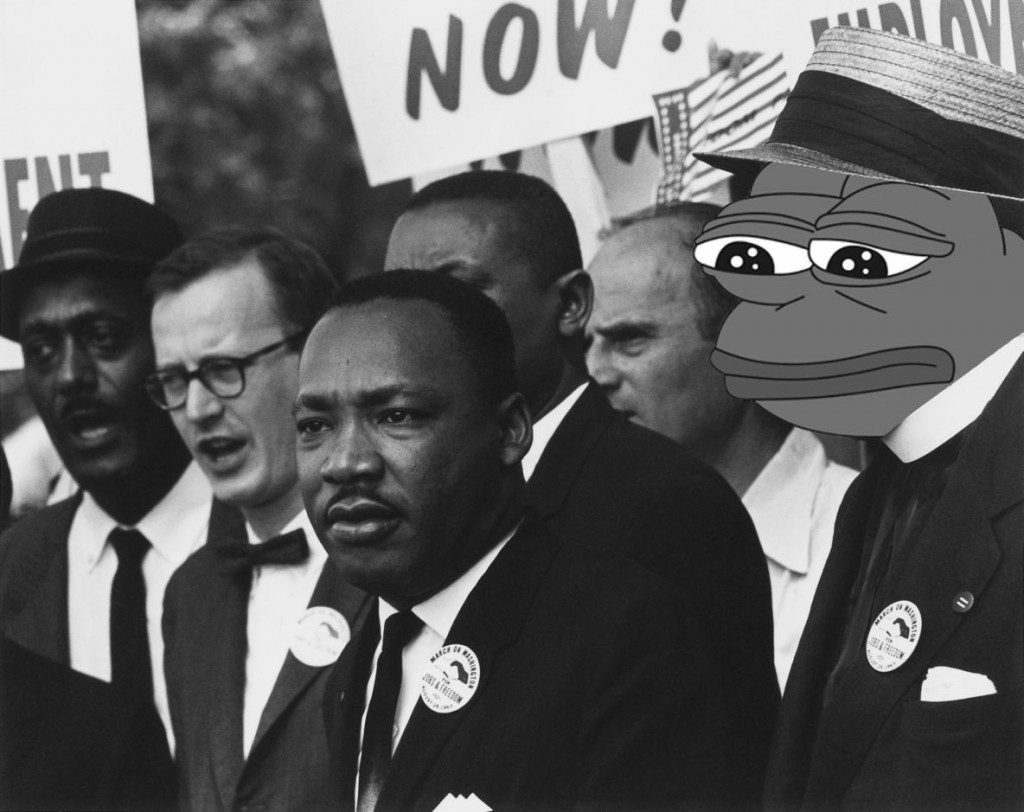 That’s the main man Pepe™ with none other than Martin Luther King Jr.  You know, the guy who had a dream, only to be gunned down by ruthless government pig dogs.  I mean… he got gunned down by that one random guy.  I’m sure if Pepe™ was there that day, he would have gladly hopped in front of MLK, and taken a bullet for him.  That doesn’t sound very racist to me.  How dare you, Hillary!  How dare you. 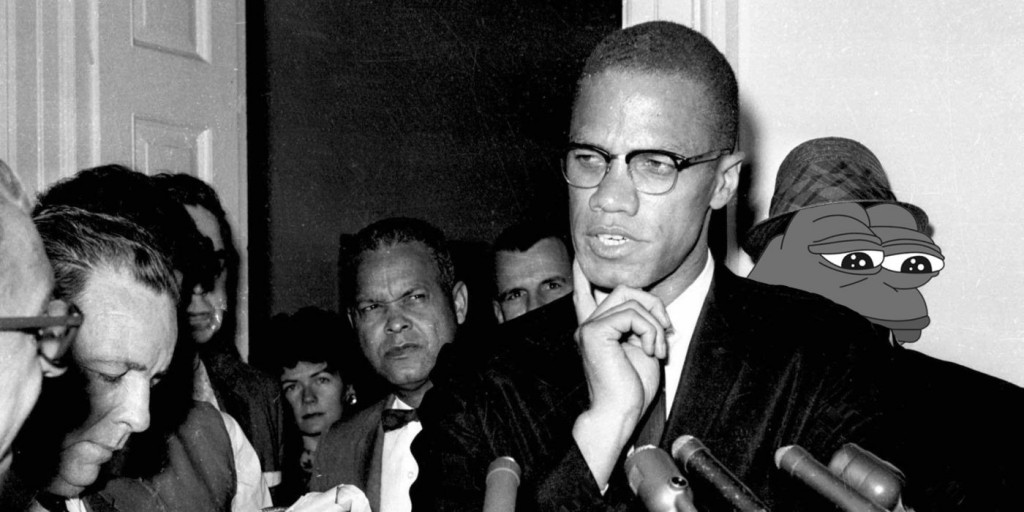 Well lookie here!  It’s Pepe™ yet again.  This time he’s cold chillin’ with none other than the main man Malcolm X.  Malcolm X was gunned down by a peace loving group called the Nation of Islam, but yet again, Pepe™ was too blazed to leap into action in time.  Oh well.  There’s always next time.  Once again, it’s the thought that counts though.  Pepe™ was just high, not racist. 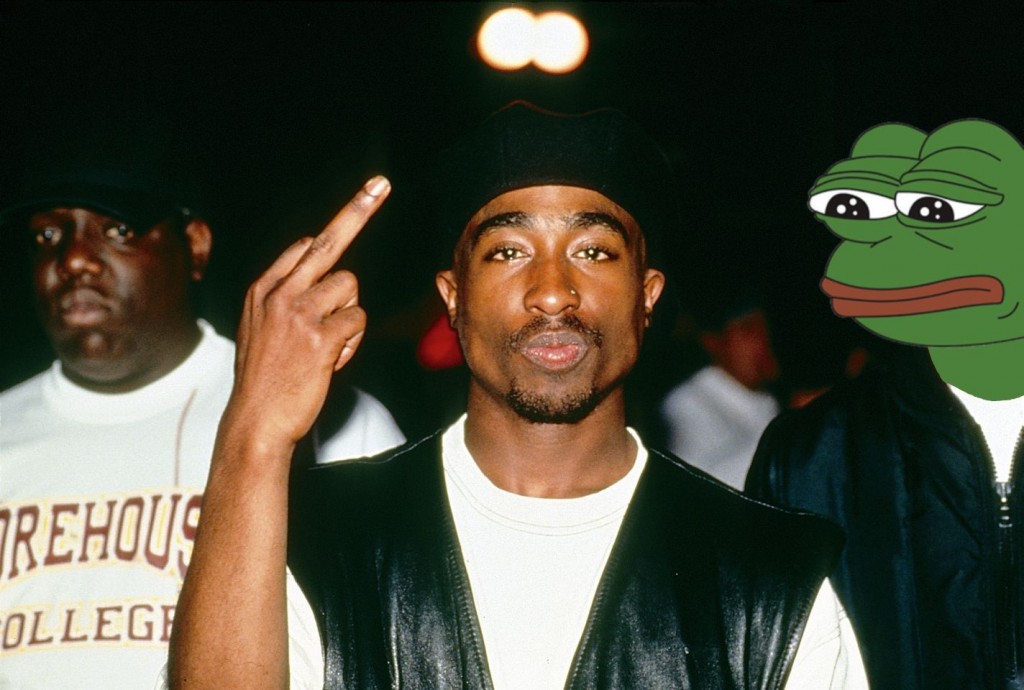 Damn.  Pepe™ sure likes hanging out with the brothers.  Remind me again why people are saying that he’s a racist?  Fact of the matter is that Pepe™ has had a hood pass since day one.  Here he is with legendary rappers Tupac and Notorious B.I.G.  The government sure has a habit of killing people that Pepe™ is friends with.  That’s probably why Hillary is trying to slander him.  It’s a diversionary tactic to cover up the fact that she assassinates black men who don’t fall in line.  Allegedly. 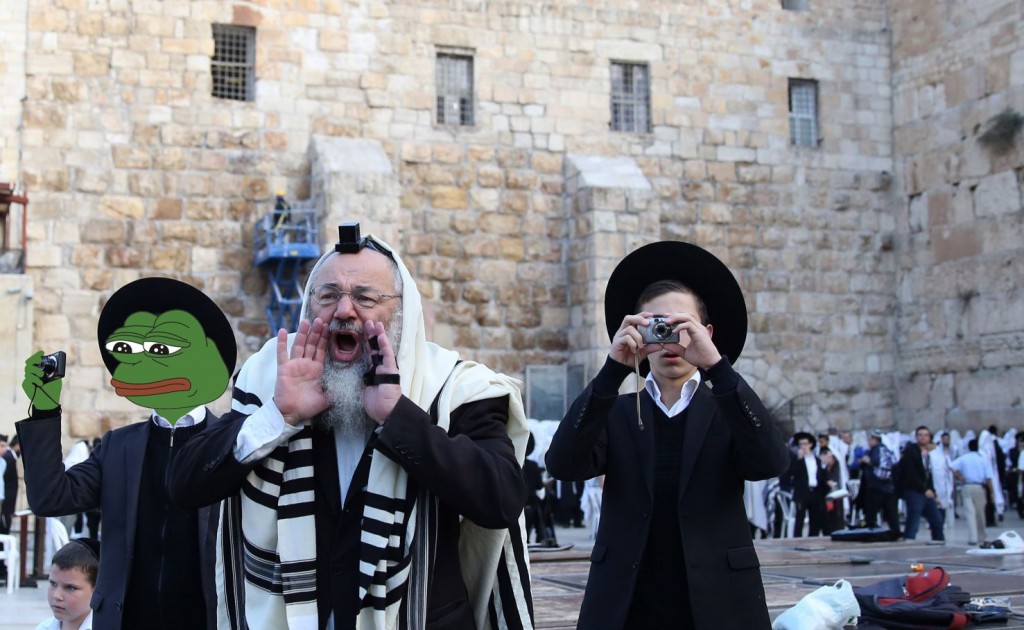 Well this picture sure is confusing.  I though Pepe™ was supposed to be all anti-Semitic or something.  Yet here he is, wearing some type of Jewish-y garb, taking pictures at the Western Wall in Jerusalem.  You know, the most Jewish place ever.  And he’s also hanging out with some type of white mage.  Maybe he’s trying to get him to cast a revive spell on all those black guys that anonymous bad guys killed. 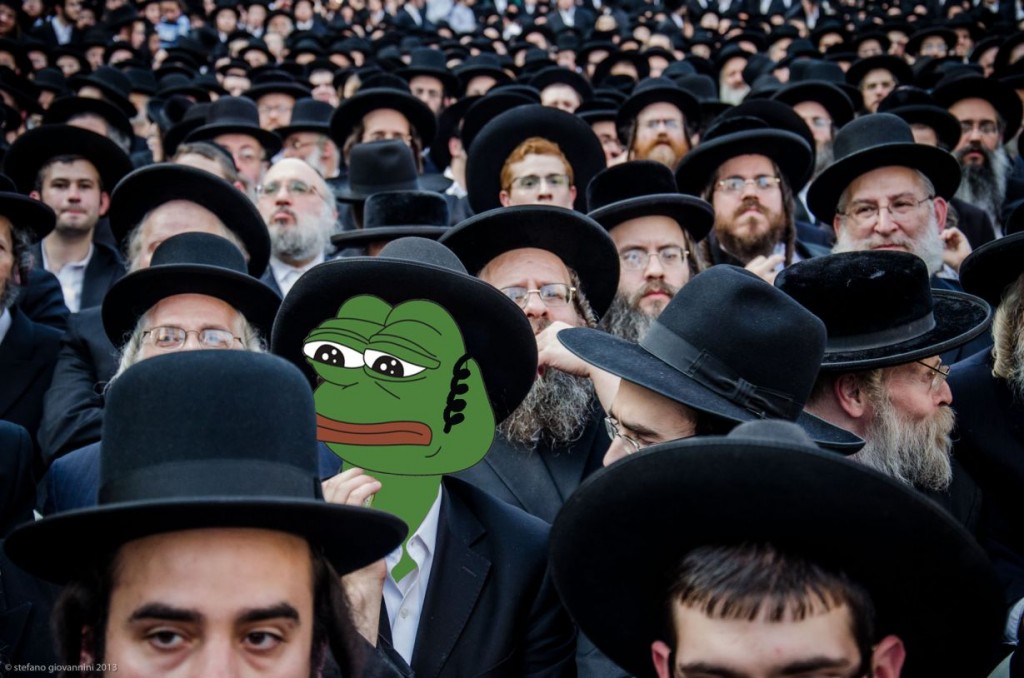 One more photo of the quite obviously Jewish, and definitely not anti-Semitic Pepe™.  He even has one of those curly noodle hair things going on.  You can’t have that unless you are legit 100% kosher Jewish.  So knock it off, Hillary “Life Alert” Clinton.  Leave Pepe™ alone and get back to rape enabling, and committing human rights violations.