In this weeks installment of “is this satire, or reality”, media has officially lost the last bit of credibility it may have had left.

The media has officially:

They went on quite the tear yesterday, practically bending over backwards to praise North Korea, specifically the first lady of tyranny Kim Yo-jong, with tweets like this: 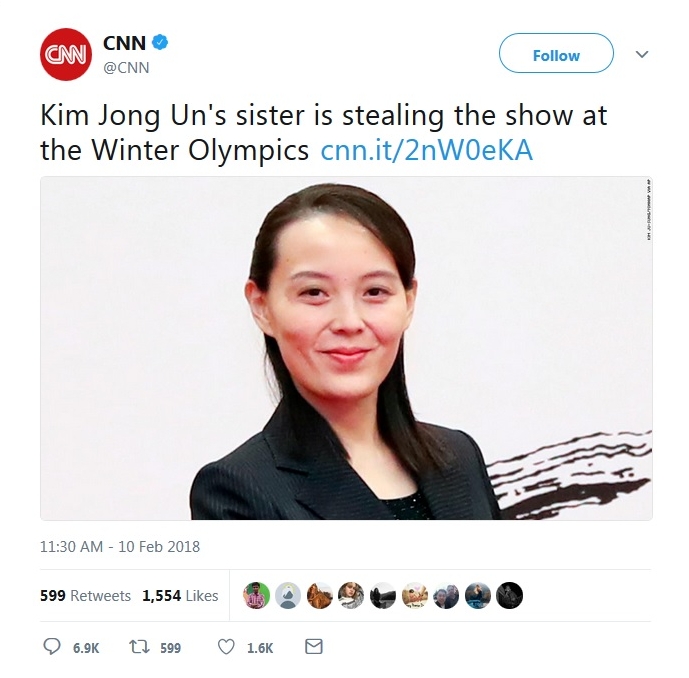 Why exactly is this “problematic”?

Well for starters, North Korea is practically one giant human rights violation. The country currently has over 100,000 of its own citizens contained within prison camps, that have catchy names like Camp 14, Camp 15, and Camp 16. In addition to hard labor, other activities that regularly take place within these camps include fun things like torture, starvation, rape, and outright murder.

North Korea employs “Three Generations of Punishment”. This means that if a citizen were to be convicted of a crime, not only do they receive the punishment, but three generations of their family do as well. What better way to prevent citizens from stepping out of line than to hurt the ones they love. What a progressive and welcoming country, deserving of the western media’s affection and accolades.

Kim Yo-jong, the sister of Kim Jong-un, is the vice director of North Korea’s Workers Party’s Propaganda and Agitation Department. That isn’t a satirical title. She is literally in charge of state-sponsored propaganda, including maintaining the cult of personality that surrounds Kim Jong-un. The media praising her is like if the media had praised Eva Braun during the 1936 Olympics in Berlin.

Of course this shouldn’t come as a surprise to anyone familiar with the media’s increasingly loose moral compass. What with the complete fabrication of events to push narratives, constant pushing of conspiracy theories, and outright romanticization of murderous dictator types (see Castro, Guevara, etc).

This is the very same media who increasingly glamorizes Communism in droves, like the gaggle of edgy, poorly educated children so many of them are increasingly turning out to be. Mind you, this is the same Communism responsible for levels of death, oppression, and human tragedy that far outnumber those of the Holocaust and slavery combined. We’re talking magnitudes of difference here.

Human dumpster fire and dumb person’s intellectual Jeet Heer posted the tweet below, before arrogantly disparaging all who took issue with it, and attempting to justify his idiocy with a 14 tweet barrage of damage control.

This tweet is fairly par for the course in Jeet’s world though. The guy’s entire career is predicated on writing sensationalized, hyperbolic anti-Trump articles and tweets. Unfortunately, nothing Trump or Pence could possibly do will ever make Kim Jong-un or his family look good in comparison. Not even Jeet’s Trump-fueled hate boner will change this fact.

Champion of the wealthy privileged class masquerading as blue collar savior Michael Moore had this to say: 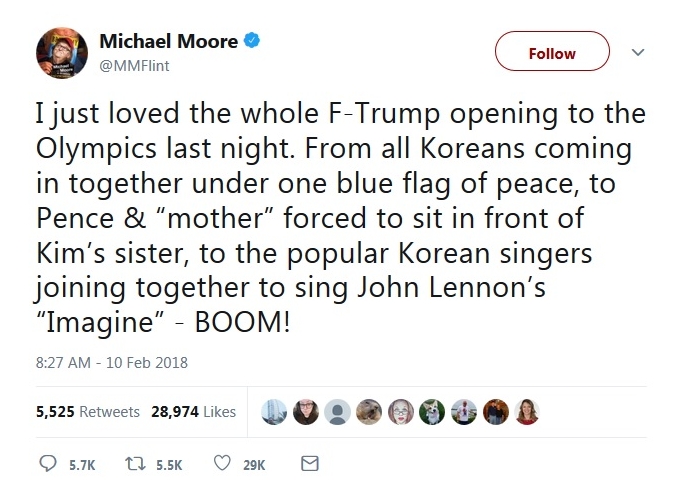 That sure is a hot take there, Captain Cholesterol. A murderous (communist) regime awkwardly unifies (strictly as a PR move) with its free capitalist counterpart to the south, and all you can see through those grease-soaked goggles is an anti-Trump event. Never mind the fact that the Koreas didn’t “come together”, so much as the south was merely being diplomatic in letting the nuisance to the north share in the Olympics (North Korea tried to have a joint Olympics in 1988 in Seoul, but were denied). Also, never mind that in spite of the hippy hug-fest John Lennon karaoke, that after the Olympics are over, North Koreans will still not have the freedoms that any other country at the Olympics get to enjoy.

Those are just two arrogant loud-mouths opining on the events however. Let’s look at some of the brilliant commentary that the actual media was laying down. 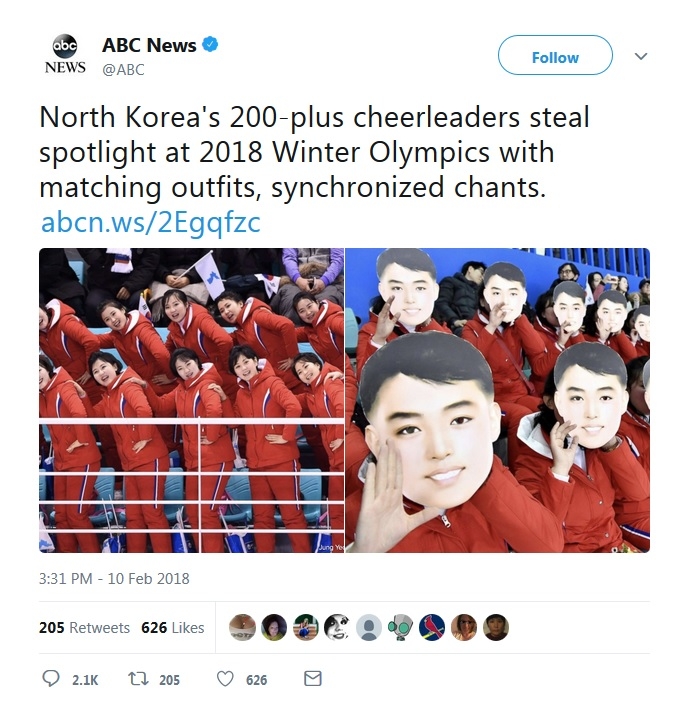 Matching outfits and synchronized chants? How cute! Except they didn’t get together and pick matching outfits and work out a routine to look cute. It’s unlikely that any of these women even had a say in whether they were to be at these events or not. Everything about their visit would have been dictated and controlled by the North Korean government. Their entire presence was a carefully orchestrated P.R. move, the headmaster of that propaganda being the aforementioned Kim Yo-jong.

Those whimsical masks are of a young Kim Il-sung, Kim Jong-un’s grandfather. The man responsible for establishing North Korea’s current prison-state and lovely policies like the three generations of punishment. Every North Korean is legally required to display and maintain a picture of Kim Il-sung and Kim Jong-il within their homes. These masks are akin to China showing up with Mao masks, or Italians wearing Mussolini masks. There’s nothing remotely cute about it. 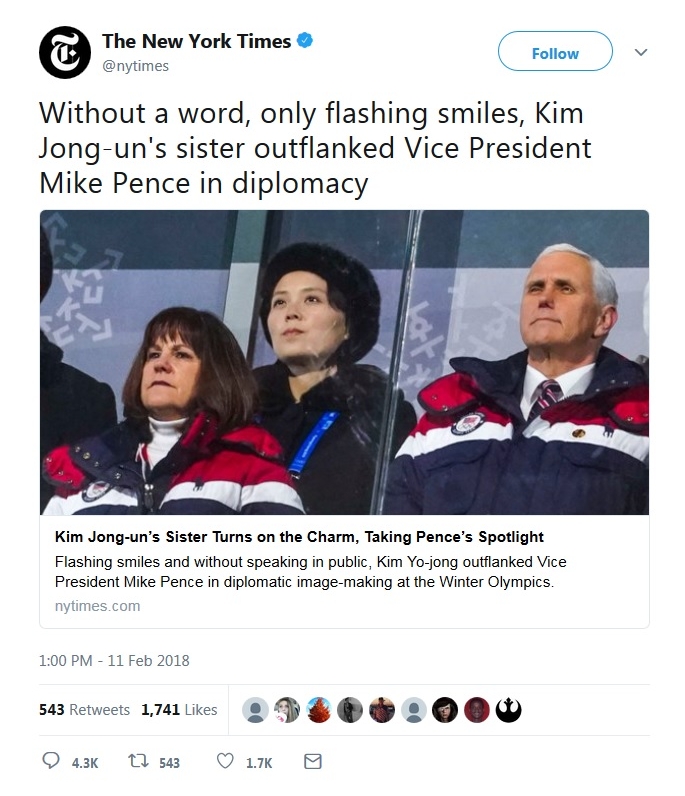 Where to even begin with this one.

For starters, it’s obvious whoever wrote this tweet had both a deep hatred of Pence and a complete ignorance of Kim. Pence is guilty of having antiquated views on homosexuality. Kim is guilty of helping run a murderous prison-state. The two aren’t even remotely comparable by any metric. Frankly, only a complete dipshit would consider anyone in the Kim family to be more diplomatic than any sitting or former U.S. president or vice president. Based on the response-to-like ratio on this tweet, most people were rational enough to feel the same way.

Keep in mind, that perhaps the reason Pence didn’t act “diplomatic” towards anyone from North Korea might be due to the fact that only eight month ago, a U.S. citizen (Otto Warmbier) was killed by Kim’s regime. 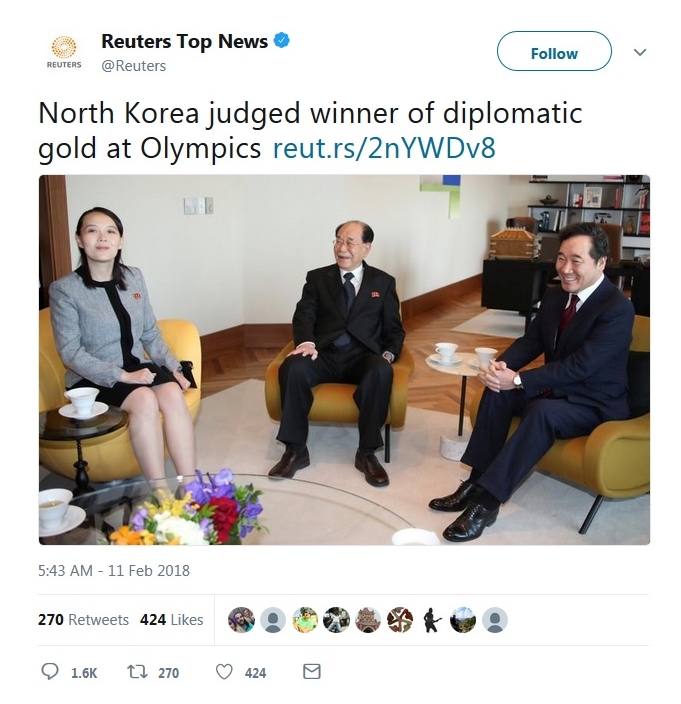 Reuters apparently didn’t want to be left out of the stupid tweet club. Once again, North Korea is a murderous, fascist regime, and there is absolutely nothing remotely diplomatic about them. If anything, South Korea were the diplomatic ones for letting a country implicit in the kidnapping of hundred of its citizens join them in their hosting of the Olympics. 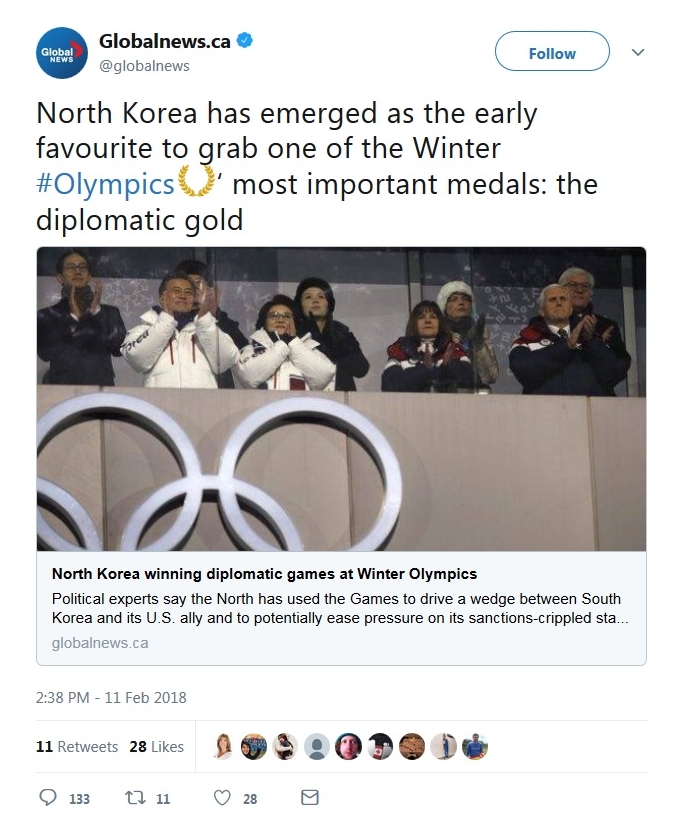 Hey guys! It’s me, Canada! Let me get in on this tone-deaf posturing too!

Alright, North Mexico. What do you have to add?

North Korea sure is diplomatic!

Did you just cheat off Reuter’s homework, Canada?

Are you sure, Canada?