James Gunn was recently fired from the 3rd Guardians of the Galaxy film by Disney, over old tweets he made involving pedophilia and rape jokes. Granted, these tweets were 6-10 years old, and obviously just stupid jokes, but we currently live in the job lynch mob era, so he needs to be crucified and banished from society.

Gunn is merely the latest in a long line of people who have had their careers affected because of disingenuous, politically-driven witch-hunts, and he will by no means be the last either.

It’s a fairly common occurrence nowadays for people’s livelihoods to be jeopardized because of these self-righteous, politically-motivated hit jobs. Somebody will dig up dirt on someone else, broadcast it to the world and all of a sudden there’s a partisan us-vs-them battle raging on over whether the individual should lose their job/sponsorship or not.

This mob justice happens on a regular basis. Sometimes it’s justified, i.e. the tweet was a call to violence (although Twitter and Facebook are quite selective insofar as when they punish people for this), but other times people face repercussions from merely making jokes that were in bad taste.

There was Justine Sacco, who was fired after a twitter mob disapproved of an ebola joke she made from a plane on her way to Africa in 2013.

There was also Katie Rich, the SNL writer who tweeted out a joke last year about how Barron Trump will be the country’s first school shooter. She was suspended after the resulting backlash.

Don’t forget about Colin Moriarty, who tweeted out the dad-joke “Ah. Peace and quite.” in response to the #ADayWithoutAWoman hashtag. This crime against humanity stirred up so much righteous indignation, that he was backed into leaving his job at Kinda Funny.

Not even high-profile celebrities are off limits to the online career lynch-mobs.

In the wake of the 2011 earthquake in Japan, Gilbert Gottfried made a series of tsunami-related jokes on Twitter that led to backlash, and his being dropped as the spokesperson for Aflac insurance.

Steven Colbert has been in the cross hairs twice over jokes he has made. In 2014, he made a joke on his show satirizing Redskin’s owner Daniel Snyder’s Native American charity with his own “Ching-Chong Ding-Dong Foundation for Sensitivity to Orientals or Whatever”. When the joke was later posted to Twitter, out of context, backlash ensued. Then, in 2017, he came under fire again, for what was perceived as a homophobic joke involving Donald Trump and Vladimir Putin. The hashtags #CancelColbert and #FireColbert were the results of both of these digital lynch mobs.

This selective outrage was in effect long before Twitter as well.

Sarah Silverman was regularly the target of outrage over the politically incorrect humor that was often the basis of her comedy. She made jokes at the expense of the civil rights movement, jokes about pedophilia, jokes about rape, and jokes about the Holocaust among other taboo topics.

She received the most heat for a joke about trying to get out of jury duty by writing something inappropriate on the submission form. In the joke, she initially writes “I hate chinks”, but doesn’t want anyone to misjudge her as a racist, so she changes it to “I love chinks” instead. End scene.

Anyone with 2 brain cells to rub together can at least see the humor in this misguided attempt to not seem racist, but still saying something racist anyway (the specific racial epithet used in the joke is ultimately irrelevant). It doesn’t matter whether you personally find the joke funny or not. You can still recognize it as a joke, and understand the premise behind it.

This didn’t stop the outrage. It also didn’t stop her from eventually disavowing the edgy comedy that made her famous, and dipping her toe into “applause break comedy”, wherein you don’t push boundaries, but rather say the right buzzwords and state the correct opinions to an audience who claps, rather than legitimately laughs. It’s less comedy, and more of a televangelist event, or TED talk.

The point of this post isn’t to decide who is a legitimate comic, and who isn’t however. It’s to decry the practice wherein people act like comedy isn’t subjective, and engage in the authoritarian exercise of trying to censor that which they don’t personally find funny.

There is no socially agreed upon line for what is considered funny and what isn’t. There never will be. Humor is completely subjective, changes from person to person, and involves taking context into account. Unfortunately, people are all too willing to let their own personal views and entitlements dictate whether or not they find something offensive and worthy of condemnation. You commonly see this when someone gets outraged at a joke because it deals with a topic that involves them personally. (e.g. 9/11 jokes are off-limits because my neighbor died in 9/11) The joke hits too close to home, isn’t funny to them, so they try to make jokes about that subject off limits. This is entitlement.

It’s also not uncommon to see someone denounce a public figure for a bad joke, then turn around and engage in some sort of mental Judo that allows them to simultaneously defend somebody else for the exact same offense. There is a word for this behavior.

Hypocrisy (noun) – the practice of claiming to have moral standards or beliefs to which one’s own behavior does not conform.

For example, when publications like Fast Company and Paste Magazine publish articles like: “Mike Cernovich’s Campaign Against Comedians is Bound to Fail”, and “Far Right Trolls Disingenuously Target Patton Oswalt, Sarah Silverman, and More Over Twitter Jokes”, they are either being hypocrites, or painfully dense at very least.

Both of these articles (and many more like them) merely make poorly veiled attempts to pin the concept of job lynch mobbing on “The Far Right”. The term Far Right in this context essentially serves as an amorphous boogeyman. Kind of like how certain people are prone to calling everyone they argue with on social media a “bot”, blame Russian hackers for everything that doesn’t work out in their favor politically, or call everyone they disagree with a Nazi (even Jews and non-whites) in hopes of discrediting them. Both of these articles also conveniently omit the fact this sort of job lynch mobbing was happening long before “The Far Right” was even a thing.

The authors of these articles even cleverly try to differentiate comedians from non-comedians, as if Patton Oswalt should somehow be granted more leeway to make a distasteful joke than some unknown individual on twitter. Either jokes should be held to different standards than outright proclamations, or they shouldn’t. You don’t get to decide who gets a pass on making a bad joke, and who doesn’t. You certainly don’t get to decide which comedians get a pass, and which don’t based on whether their politics align with yours or not. This is both hypocritical, and entitled. 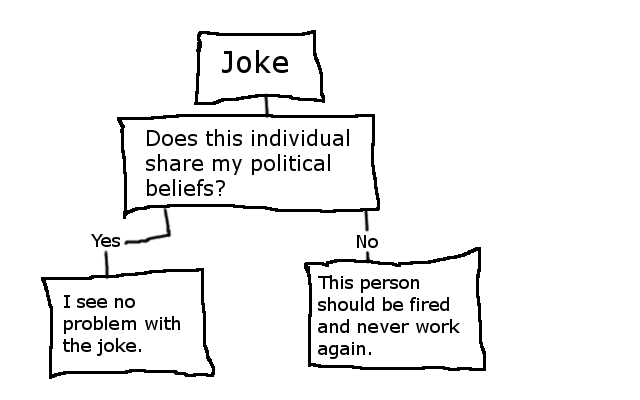 This is precisely how these people operate though. Both the authors of these articles, as well as Mike Cernovich himself are guilty here. You can’t prop up these double standards wherein you consider an offense to be ok in certain circumstances, but not ok in others. It’s completely disingenuous.

It’s been quite something to see people who are prone to this outrage torch-mob behavior suddenly having a problem with it being implemented in ways that they don’t personally agree with.

I posted a tweet saying something along the lines of “Maybe if all the James Gunn defenders had been against job lynch mobs before now, we wouldn’t be in this boat right now”. I got a response from a gentleman that merely bolstered the point I was trying to make. He claimed that it was different in the James Gunn scenario because the tweets happened years ago, and Mr Gunn had apologized for posting them. He was essentially saying that there’s a statute of limitations on how long someone can be held accountable for tweets, and that merely apologizing should relieve one of all accountability. Neither of these rules has ever held true in any of other instance of these job lynch mobs however. He had simply made them up for the purpose of protecting someone he had a vested interest in.

“No, this case is different” seems to be the most common response you’ll get when calling out these hypocrisies. People are unwilling to accept that fact that they hold these egregious double-standards, so they see nothing wrong with trying to move the goal post to remain on the right side of the argument. Time and time again, when people make this “no, it’s different” argument, they’re doing so out of entitlement. They’re personally invested in the accused, and are willing to bend the rules of job lynch mobbing to create a one-off scenario that conveniently pardons the guilty. As it turns out, this gentleman who had replied to my tweet had a profile full of Marvel-related posts. He had a vested interest in the accused, so he had no problem attempting to move the goalposts.

The fact of the matter is that James Gunn had tweeted out numerous jokes about pedophilia (though nowhere near the 10,000 tweet figure that certain people are dishonestly parroting), and was employed by Disney, a company that largely caters to children. This didn’t look good from a P.R. standpoint. Companies ultimately have the right to dissociate from individuals who are bad for their image.

The same thing happened when Cartoon Network decided not to renew Million Dollar Extreme: World Peace when a BuzzFeed writer wrote a hit piece containing buzzwords like “alt-right” after developing a personal vendetta against one of the show’s creators. It never really matters whether the accusations are true or not. No company wants the bad publicity these witch-hunts bring with them, so they are often quick to fire the accused party.

I don’t agree with people maliciously digging through other people’s online histories and trying to get them fired, but either you fight to end this kind of behavior, or you learn to deal with the consequences of the game you’ve chosen to play. Creating double standards will never be the answer. Creating “but this time it’s different” scenarios isn’t going to work.

Anyone who isn’t opposed to this kind of behavior when it’s used against “the other side” is just as guilty as the ones digging up the dirt. You don’t get to help build the guillotine, then turn around and whine about people being beheaded with what you helped create.

In the past it would have been the humorless ultra-Christians who would take offense to anything deemed “not nice” in comedy, but now the humorless ultra-Progressives are in on the regressive morality policing too. Now we have two ideologies double-teaming rationality in a race to send us back into the stone-age. Good work, you dummies.