Guess what?  It’s been 6 months since my last Twitter post, a.k.a. filler material until I put something up that I actually invested time and effort into creating.  This is a momentous occasion, so I think I’ll celebrate it by posting yet another list of things I would post on Twitter, if I used Twitter, which I don’t because it’s a vapid platform full of self-absorption, and complete lack of substance or creativity.  It seems like I’d fit right in on Twitter, but I have a cool guy image to uphold, with my being a maverick and going against the grain and all, so I’ll just continue posting things on a site that people only stumble upon while looking for bundt cake recipes.  Enjoy!

1)  You can buy chili without beans and chili without meat, so what exactly constitutes chili? Has it merely been a sauce all this time?

2)  I think it’s great that there are people out there who choose to grow Natty Dreads and avoid the use of hairoids all together.

3)  I invented a new game called Sudoku-Klux-Klan.  It’s for people who like doing puzzles, but also like hating minorities.

4)  I tried to look up an antonym of opposite on synonym.com and caused the internet to crash.

6)  I had food poisoning once.  I bought it because some spaghetti was pissing me off and needed to be killed.

7)  Japanese Mayo; It’s just like American Mayo, except when you open the lid, a bunch of tentacles pop out and rape all your orifices.

8)  I like when people wear glasses as a fashion accessory. I’m thinking about wearing a hearing aid or rocking crutches next time I go out.

9)  I wonder if anyone’s ever gotten a “No Regrets” tattoo removed?

10)  What do Eazy-E and Bill Cosby have in common?  They’re both in the “Rap E” section at the local music store.

And there you have it!  Hopefully it’ll be a while until I need to dip into my text file archives for another filler post.  I need to start photoshopping more stuff, or at very least start posting content more often.  Unfortunately, putting effort into things is at odds with my natural inclination to not do anything productive.

I’m so psyched!  The newest Prius is out and I can’t wait to buy it!  This will be my third Prius now.  I won’t actually own three simultaneously, but I need to keep buying the newest model in order to save the Earth.  Yea, it allegedly requires a huge amount of energy and resources to built these cars, but I don’t have to buy as much gasoline, so it more than evens out.  I really only use it to go down the street to shop for frozen vegan quiche from Natural Foods™, but I don’t want to take the bus, because then I won’t be helping to save the Earth with my Prius.

It really is a great car.  Automobiles used to scare me, with all the loud noises and moving parts and whatnot, but the Prius is so non-threatening.   It completely doesn’t feel like something potentially dangerous that I probably should be paying attention in while I drive.  Get out of my way pedestrians!  Honk!  Honk!  Am I right?  I don’t have time to pay attention.  I’m too busy saving the planet!  And besides, how can it be dangerous if it’s so cute and quite?

The other day my friend told me that he thinks it would be great if all Priuses were self-driving, and that they all drove straight into the ocean once you got into them.  He’s such an Earth-saver hater.  I think he just needs to eat more organic, natural vegetables and chill out.  At very least, he should go out and buy a Prius so that he can see how awesome they are and experience the magic of instantly becoming a better person.  Anyways… gotta go!  It’s off to the dealership for a trade-in.  Also, check out the latest Prius ad.  It’s kinda weird, but there’s a lot of green in the ad, so that gives me a warm fuzzy feeling.  Peace! 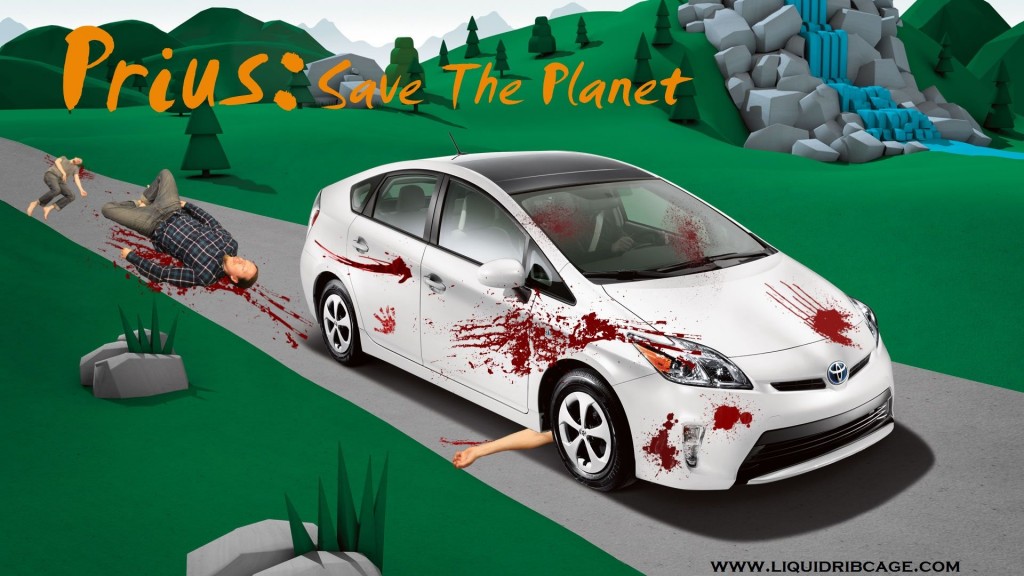